Prediction: Obama will LIE about Iraq

Mark my words, Obama WILL LIE to get re-elected. I predict that he will claim that HE ended the war in Iraq. True it ended on his watch but he did not end it, George Bush ended the war, that's right BUSH ended the war. Obama has done NOTHING but carry the agreements made by the Bush administration. But just watch, Obama will try to take the credit. If he will lie about something this serious then how can you believe anything he says (as if we need more proof!).
On December 14, 2008 President Bush signed the IRAQ STATUS OF FORCES AGREEMENT with Iraq's prime minister Nouri al-Maliki. That agreement stated US forces would withdraw from major cities by June 30,2009 and that was done and that all US forces would withdraw from Iraq by December 31, 2011.
Look it up and when Obama tries to take credit you'll only have one thing you can say about the president...LIER!!!!! Then go to the polls in November, vote Republican for President and Congress and let's get on with the rebuilding of our great country. There is still time to recover from Obama's mess but if he gets another four years we may not be able to repair the damage for decades.
Posted by Truthmonger at 2:58 PM No comments:

ABC and FOX Debates now in the books

Well we have had two more debates and clearly it is coming down to Newt and Mitt. My take is Newt is the clear front runner with Mitt a close second. Both of them have done very well in these debates. One thing worth noting is that while they have exchanged a few barbs they have for the most part stayed on track and stuck to the issues. I like that. On the other hand it's time to shed some of the excess candidates real soon. Start with Huntsman, he's done, no chance in hell, smart guy, seems nice enough but really he's just taking time from those that have a chance....time to go John, bye bye! Next is Michelle Bachmann, sorry, NO chance and I'm getting real tired of her whining. She is doing more damage then good now, on the attack with her false claims and accusations she is just loading the left with ammo for the future. Reagan said you don't disparage another republican, she should listen. Next is our crazy uncle, Ron Paul. Don't get me wrong, Love Uncle Paul, he is dead on when it comes to the monetary system, Fed, debt and most domestic issues but he is whacked out completely wrong on foreign policy. Sorry regardless he isn't electable, Obama would destroy him in a debate, he can't win so bye bye uncle Ron. The rest of the field is OK to go for now. I'll leave Santorum in there because he is a smart guy and a good possible vice president so folks need to continue to get to know him.
Next up is the Iowa Caucus on Jan. 3. So it starts and off we go....

To watch all the debates in full follow this link:
http://www.2012presidentialelectionnews.com/2012-debate-schedule/2011-2012-primary-debate-schedule/
Posted by Truthmonger at 2:23 PM No comments:

Here is a fun and informative site, take political quizzes and participate in polls. Check it out.

'via Blog this'
Posted by Truthmonger at 1:16 AM No comments: 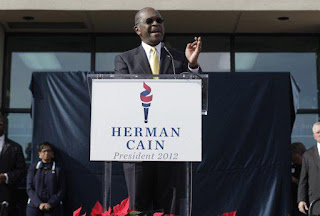 And so it goes, Herman Cain is the first to drop out. Caught up in a media storm over sexual allegations and with money drying up because of it there was no other choice. The right loses a strong voice that brought many new ideas and dialog to the contest but do to the harsh reality of presidential politics there was no way he could get elected. The good news is, as he said in his exit speech, he proved that a regular guy with no political background can make a solid run. On top of that it also proves the left wrong when they try to paint the right is raciest. It will be interesting to watch what he does in the future, if he becomes a voice to be reckoned with or fades into history. We'll be watching.
Posted by Truthmonger at 11:17 AM No comments: